Acharne (formerly Furry Dash), is well-known, skilled player, who specializes with the wave gamemode. This was proven as he had beaten (or verified) extremely hard levels which central feature is the wave gamemode, for example, Sakupen Hell, Crimson Clutter, Bausha Vortex, and most notably, Sonic Wave.

While generally considered as an expert wave user, he also completed several other difficult demons, which includes both versions of Cataclysm, Bloodbath, Aftermath, ICDX, Cosmic Calamity, and Yatagarasu.

He is currently verifying the upcoming Blade of Justice, after Sunix handed the level to him. 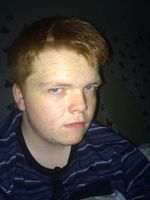 This RobTop face pose was not intended, the flash hurt his eyes.
Add a photo to this gallery
Retrieved from "https://geometry-dash-players.fandom.com/wiki/Acharne?oldid=2008"
Community content is available under CC-BY-SA unless otherwise noted.